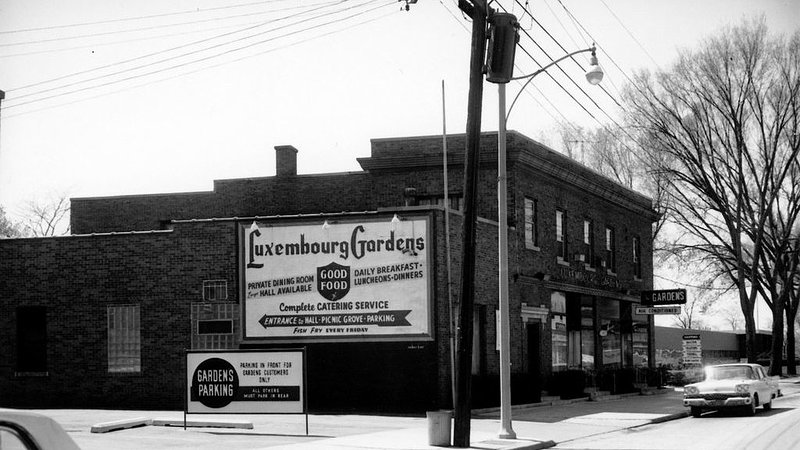 Chicago is the largest settlement of Luxembourg immigrants and their descendants in the United States. Thus, there have been some interesting sites in Chicago associated with Luxembourgers. Below are a few sites, past and present, that reflect Luxembourgish heritage in metro-Chicago.

In 1953, the Grand Lodge of the Luxembourg Brotherhood of America learned that the Deckert family was selling their establishment. In September of that year, the officers of the Grand Lodge met to discuss the possibility of purchasing Deckert’s place as a central social club and picnic grove for use by all Luxembourg societies in the city. The hope was to unify the various Luxembourg societies who were beginning to see some decline in participation by the next generation. 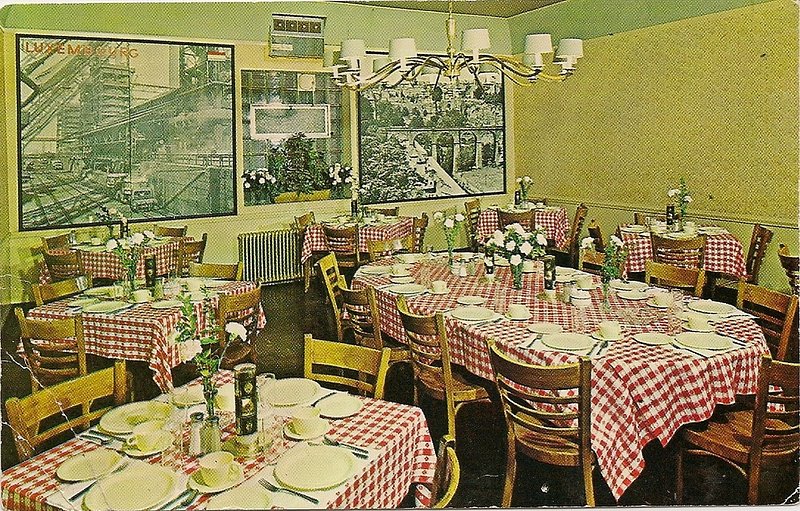 After agreeing that Deckert’s could serve this purpose, the decision was made to set up a separate corporation to oversee the fundraising and management required for this new Luxembourger social club. Fred Pesche, an immigrant from Folschette, Luxembourg, and owner of one of the largest greenhouses in Chicago, took the lead in the new organization. Shares in the new Luxembourg Gardens social club and picnic grove were purchased by members of various Luxembourg societies who showed their support.

On 1 January 1954, Luxembourg Gardens opened its doors and became a home for all Luxembourgers in Chicago. It featured a cocktail lounge for 100 people, a large hall with stage with a capacity of 600 people, two dining rooms for 200 people, two modern kitchens and an outdoor picnic grove. Leo Eschette, a former greenhouse owner, and his wife Margaret, and later Nic Colling, an immigrant from Weiler-la-Tour, Luxembourg, served as the long-time managers of the establishment. 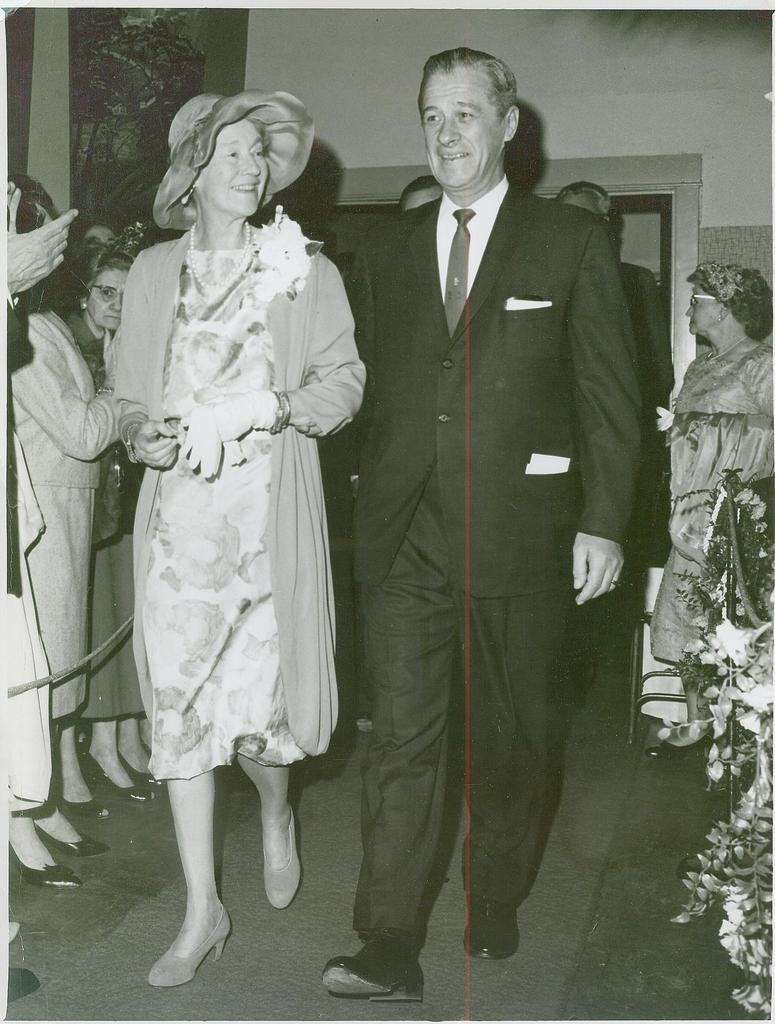 Unfortunately, with the changing times of the 1960s and financial struggles, Luxembourg Gardens was forced to close in 1966. The property was sold and eventually torn down to make way for apartments.

There is an old saying that "a man’s home is his castle." This was literally true for Teddy Bettendorf, a Luxembourg immigrant from Vianden, Luxembourg who settled in Fox River Grove, Illinois. Teddy was born in Vianden on 15 May 1889.  As a child, he roamed around the abandoned halls and passageways of the 11th-century castle ruins which towered over Vianden. This experience left an impression on him that would impact his future in an amazing way.

In 1916, as World War I was raging, Teddy emigrated to Chicago as many young, single Luxembourg men were doing. He became employed as a machinist at the Brach’s Candy Company in Chicago.  In 1931, amidst America’s Great Depression, he decided to get away from the hustle and bustle of the city. Teddy purchased a modest, three-bedroom home in the rural community of Fox River Grove, a northwestern suburb of Chicago. The property was located atop a bluff overlooking Fox River Grove along what is now Route 14. Shortly after getting settled in, Teddy set off on a 30-year project to build his own "castle" inspired by the Vianden castle back home. 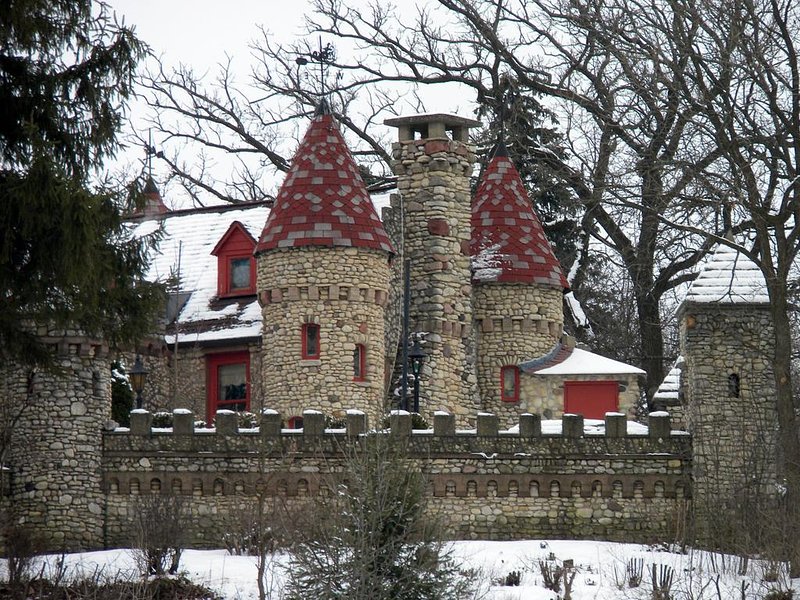 Teddy remained a bachelor and commuted daily by train to his job in the city. During World War II, he worked as a machinist in a factory which manufactured war equipment. But in his free time, in the evening, on weekends and on holiday breaks, he could be found painstakingly setting up scaffolding, collecting sand and stone, mixing mortar, and precisely laying stone.

The project began with Teddy applying a stone veneer to his modest frame home. But by the winter of 1932, it was evident that he was doing more than a simple enhancement of his house. The footprint of a lone, little castle, complete with turrets, appeared atop the hill.  Teddy’s "little Vianden" castle quickly caught the attention of everyone in Fox River Grove.

When Teddy started digging a foundation for his little house, he realized that his property was sitting on the two most necessary ingredients for his project, sand and stone. Over time, he dug two vertical mine shafts measuring 50 feet and 60 feet into the bluff’s interior. In doing so, he quarried most of the sand, gravel and stone needed for his project. Yet Teddy also realized that if he did not line the walls of the mine shaft with concrete, the mine would collapse. So, he undertook the extraordinary lining of the mineshaft walls with concrete but in the unusual pattern from top to bottom as he dug deeper into the bluff. 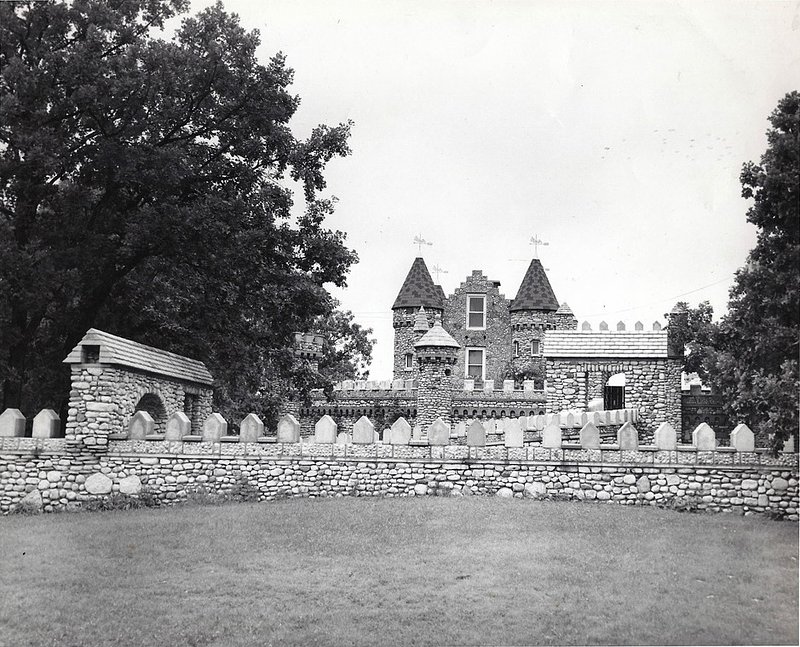 Bettendorf Castle and gardens. / © From the Kevin Wester collection

As more stone was needed, Teddy gathered and hauled stone from nearby fields and quarries in his Model-T truck. This was the same truck he used as a winch to pull and lift material as he arduously set each stone of the project into place. Teddy used an old postcard of the Vianden castle as his inspiration for the project.

Slowly, Teddy’s castle grew with four towers and turrets, battlements with walkways, a guard-tower and a gate house with a functioning drawbridge, moat, dungeon, castle yard, fountain, garage, coach house, a wishing well and even an outdoor garderobe (toilet) built with "modern conveniences." The bastion and tower roofs looked as if they were topped with slate. Yet they were actually "faux" slate shingles that Teddy made by hand by dyeing hand-cast pieces of concrete. Being a machinist, Teddy also made by hand many of the "ornaments" of the project including the weather vanes, the iron drawbridge chain links and the knockers on doors.

Over the years, Teddy’s castle caught the attention of people well beyond Fox River Grove. In the 1950s and 1960s, newspapers and magazines around the USA published articles about Teddy and his remarkable castle including Ripley’s Believe It or Not! and Popular Mechanics.

Teddy enjoyed the attention and became a friend to the community. He allowed TV commercials to be shot at his property and he welcomed visitors to tour his property.  His castle was his life’s passion and his pride and joy.

Teddy continued to work on his castle until shortly before his death on 30 September 1967, at age 78. It is said that he died with little financial resources and that members of the Fox River Grove community purchased a grave site and headstone for him at St. John’s Cemetery in Fox River Grove. The headstone bears the image of his castle and the inscription reads: "He built a castle as a monument to his love of mankind, his loyalty to his country, his dedication to his fatherland and respect for his Maker."

Since Teddy had no heirs, the castle was put up for auction in 1968. More than 25,000 people toured the castle during open houses held before the auction. While the exterior of the castle was lavish and ornate, it was a surprise for visitors to find that the interior was sparsely decorated and that Teddy had simply slept on a mattress on the floor.

The castle was purchased at auction by Mary and Herman Wren for $81,000. They began remodeling and updating the castle’s interior so it could be rented as a honeymoon hideaway. In 1976, the Wrens sold the property to Linda and Peter Petmezas who made it their private residence.

It was sold a final time in 1985 to Michael and Judy Strohl who made it their residence. Michael was a contractor and after purchasing the property, he began a full restoration of the exterior of the property. In the spirit of Teddy Bettendorf, the Strohls have once again opened the castle to the public for outdoor tours as well as charity events and private functions, such as wedding receptions.  You can learn more by visiting their website.

Tune in Saturday for part two of this article exploring the Luxembourgish sites in Chicago! Kevin Wester resides in Milwaukee, Wisconsin, USA and is the former Executive Director of the Luxembourg American Cultural Society.  He now operates Luxembourg Adventures tour company and assists individuals in reclaiming Luxembourg nationality. He is an avid genealogist and researcher of Luxembourg and Luxembourg American topics. You can contact Kevin by email.