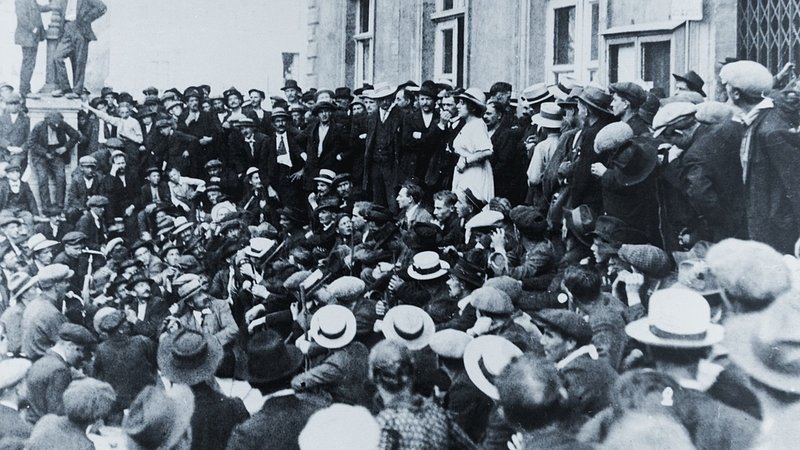 This year, Luxembourg is celebrating a crucial anniversary in the domain of democracy and citizenship. On 8 May 1919, all adults aged 21 and above and holding Luxembourgish citizenship were entitled to vote, thus removing any obstacles from would-be voters, no longer constrained by their wealth, age, social class, or gender.

In Luxembourg, universal and women’s suffrage came in one fell swoop – unlike other countries, the former was not introduced prior to legislating women’s rights to vote.

It is on occasion unthinkable to imagine that just over 100 years ago, women were not entitled to vote. Half the adult population was disenfranchised before this point, whereas many voters today take their right for granted. The Chamber of Deputies has worked closely with the National Museum of Art and History (MNHA) to put together an exhibition celebrating the centenary of universal suffrage - #wielewatmirsinn [editor's note: playing on the Luxembourgish motto Mir wëlle bleiwe wat mir sinn, the expression translates to 'voting what/who we are']. In view of the centenary and the exhibition celebrating this democratic milestone, we will explore how the phenomenon came about.

Setting the scene in Europe

Before we proceed to the landmark moment in Luxembourg, it is worth exploring the landscape in other European countries. Luxembourg distinguishes itself from several of its neighbours in enfranchising all adult men and women, irrespective of literacy or wealth, at the same time. In Belgium for instance, women were not enfranchised until 1948 – previously, voters’ rights from 1893 depended on education and taxpayer status, and widows were only allowed to vote until they remarried. Men were enfranchised in 1918. 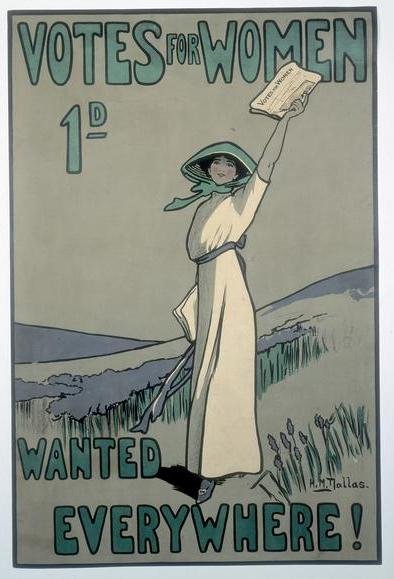 France experienced a rollercoaster of suffrage changes from 1792 onwards and universal male suffrage was granted in 1848 and full universal suffrage just under a century later, in 1944. Under the German Empire in 1871, all adult men were permitted to vote. After World War One and the creation of the Weimar Republic, universal suffrage was legislated with a minimum voting age of 20 in 1919. The United Kingdom’s Representation of the People Act in 1918 granted the right to vote to all men, but only a small proportion of women, and was only rectified a decade later. The voting landscape in Europe was anything but simple, as these few dates demonstrate clearly.

Leading up to universal suffrage

One European example certainly did inspire the movement for universal suffrage, namely a key moment in the early twentieth centuries. What exactly am I talking about? If you began excitedly murmuring ‘the 1917 Bolshevik Revolution’, you would indeed be correct! The Russian Revolution capsized the monarchy in Russia and, in abolishing the monarchy, set up a provisional government in the first step that would lead to the founding of the Soviet Union in 1923. For the purpose of this article, all we need to remember is that universal suffrage was granted in 1917.

This naturally had a knock-on effect, including in Luxembourg. But already beforehand, socialist murmurings were on the rise. In 1902, the Sozialdemkratischer Verein, the first socialist party, was founded. There was an odd disparity in Luxembourg as despite the Grand Duchy granting women’s suffrage in one swoop, there was not a huge women’s movement, unlike other countries that fought for longer and had dedicated campaigns.

The first two Luxembourgish women’s organisations are in of themselves endemic of the lack of women campaigning: they were the Organisation for Women’s Interests (OIF) and the Luxembourg Catholics Women’s Association (Frauenbund). The former mainly focused on the right to work and founding a women’s secondary school, which they succeeded in with the founding of now-Lycee Robert Schuman in 1911. One of the key founders of this group was Aline Mayrisch. Neither organisation was especially interested in advocating women’s right to vote, especially as the Catholic Frauenbund followed the Luxemburger Wort’s position on the matter, which is clearly summarised in the quote: “the organisation of a State where both man and women share the same rights is contrary to nature.”

The main thrust of the demand for universal suffrage consequently came from the workers’ movement, which had advocated it as early as 1902, explicitly including women. The first petition from the socialist democratic workers’ party was submitted in 1905 – but as the movement fused in 1912, advocating women’s rights deteriorated.

Women did mobilise at the end of the war as constitutional reform was clearly on the agenda (more on that in a moment). Three women, namely Jeanne Meyer-Heucké, Marguerite Hey-Fink, and Marguerite Mongenast-Servais addressed a petition to the Chamber of Deputies, calling for universal suffrage in June 1918. Things were coming to a head at this point, and more women were joining the socialist movement, including activist Lily Becker. Becker attempted to create a female employees’ association, but was unsuccessful. Becker, also a trade unionist, held a speech in front of the Chamber of Deputies on 13 August 1919 condemning the rising costs of foodstuffs.

1919, the year universal suffrage was granted, was a turbulent one indeed. The government of national unity was bombarded by labour demands from the previous winter, and forced to conceded the eight-hour working day in the face of these demands. In January 1919, an uprising against the establishment and Grand Duchess Marie-Adelaide required the intervention of the French army to keep the country from descending into chaos. A republican coup was avoided, and the Grand Duchess abdicated in favour of her younger sister, Charlotte.

Given the precarious state of the monarchy, the authorities committed to a referendum on the future of Luxembourg, which was delayed to September 1919. This would become the first political vote all adult men and women (above the age of 21) could participate in. On 8 May 1919, MPs voted to amend the constitution in favour of universal suffrage, after the topic had been on the agenda over the past year. Whilst in 1918 parties debated universal suffrage, they diverged in their support for women’s right to vote. The socialists, who had spearheaded campaigns and petitions, had become more subdued in their support, despite initially driving the discourse. On the flipside, conservative parties were open to the possibility – women, as devout housekeepers, could perhaps become a reliable voter base.

For the first time in the country’s history, men and women voted in the referendum of 28 September 1919, ultimately opting to maintain the monarchy and to have an economic union with France. A month later, Luxembourgers went to the polls again – for the legislative elections. The October 1919 election saw the first female MP be elected: Marguerite Thomas-Clement. She was voted in again until 1931, but Thomas-Clement’s election was not the signal of change we might have thought it was. From 1931, Luxembourg’s Chamber of Deputies had no female MPs, a drought ending only with the election of CSV MP Astrid Lulling in 1965. 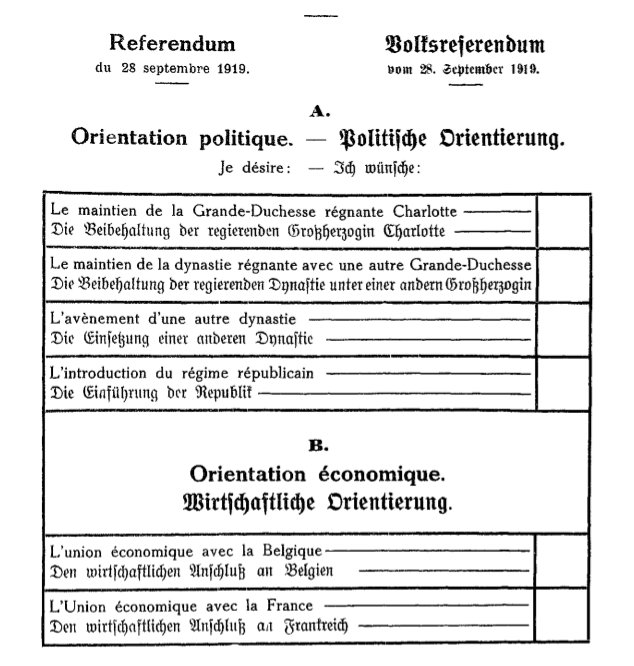 The first political vote open to all adults over the age of 21, the referendum concerning Luxembourg's political future. / © By https://sudd.ch/doku.php?lang=fr&item=lu011919-zettel.pngBeat Müller beat@sudd.ch — https://sudd.ch/doku.php?lang=fr&item=lu011919-zettel.pngBeat Müller beat@sudd.ch, CC BY 4.0, https://commons.wikimedia.org/w/index.php?curid=84042342

Régis Moes and Renée Wagener stressed that the legal right did not mean the fight had ended, as evidenced by the dearth of women representing the country for nearly three decades. Lily Becker, too, expressed disappointment at the opportunity of 1919 in an article written in 1979: “At that time, women did not care. They were given the right to vote as a gift to save the dynasty.”

Universal suffrage in Luxembourg provided the political foundations of the system we know today. This was but the base of the current system: Luxembourg’s political foundations continued to be moulded throughout the twentieth century. The minimum voting age was lowered to 18 in 1972 and the limit of 60 MPs representing the country was further introduced in 1988. All in all, 1919 nevertheless proved to be a huge turning point in Luxembourg’s democratic history.

Nathalie Lodhi is an editor and translator for RTL Today with a background in history. If you have a question, suggestion, or subject you'd like to offer insight on, contact Nathalie at nathalie_lodhi@rtltoday.lu. For those interested in the National Museum of History and Art exhibition, visit their site for further information. The exhibition remains open until September 2020.