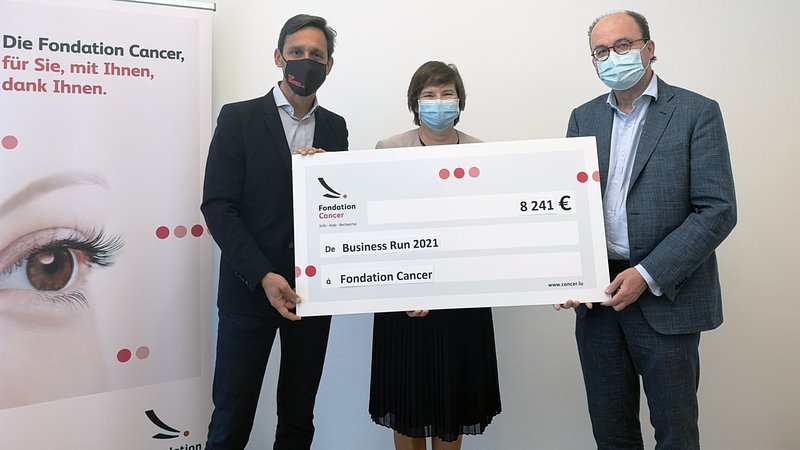 €8,241 in donations were collected at the Luxembourg Times BusinessRun +++ Run for charity +++

Luxembourg. From September 15th to 19th they were on the road again – the runners of the virtual Luxembourg Times BusinessRun and on Thursday, September 16th at 7 p.m. at the live event on the Kirchberg plateau. The live event was sold out this year, with the maximum number of 1,500 participants, and with the virtual run, a total of over 1,700 starters took to the trails. €5 were donated per Virtual BusinessRun, and €2 per live runner. In addition, companies were able to donate any amount they wanted when registering online, and the runners from these companies received a special charity bib number to mark their commitment and thus became so-called "BusinessRun-Heroes". This resulted in a total donation volume of €8,241.

"We are really pleased that this year, in addition to the virtual run, we were finally able to implement a CovidCheck-compliant live event on the Kirchberg plateau again and thereby support our official charity partner, the Fondation Cancer Luxembourg", says Anton Wolf, Managing Director of n plus sport GmbH from Saarbrücken, adding "We hope that with the vaccinations progressing, we will be able to host the Luxembourg Times BusinessRun again next year in the usual way, with the finish line in d'Coque and a big AfterRun-Party."

Doing good while running has been an integral part of the BusinessRun since its inception and is inseparable from the concept of the event, whether as a live event or virtual team building. 100% of the donations go to Fondation Cancer, a non-profit foundation with the purpose of providing information for the prevention and fight against cancer. It also supports initiatives, scientific research or information campaigns that serve the fight against cancer in the broadest sense.

Thanks to all participants, service providers, helpers, sponsors and partners who made this amount possible.